The Significance of Somvati Amavasya was narrated toYudhishtra by Bhisma in the Mahabharata. It is said that who ever takes a bath in the sacred rivers on the day would be prosperous, free of diseases and would be free from grief and sorrow. There is also a popular belief that the soul of ancestors will rest in peace if children and relatives take a holy dip in the sacred rivers.

Married women take the holy dip for a happy married life and for the long life of their husbands. It is believed that a fast on this particular Amavasya would ward off widow-hood in women and ensure bearing of progeny. It is also believed that all desires could be fulfilled if one fast on this Amavasya

This amavasya is celebrated in Jejuri in Maharashtra. A palakhi (palanquin) procession of Khandoba and Mhalsa's images is carried from the Gad-kot temple to the Karha river, where the images are ritually bathed.

As per the story of Somvati Amavasya, once upon a time there lived a money lender who had seven sons and one daughter. He married all his sons but could not find a suitable match for his daughter.

A monk visited their house regularly and blessed the money lender's daughters-in-law but never blessed the daughter. The daughter told her mother about this and she confronted the monk with this question. The monk did not reply and left quietly. This really worried the mother and she called a Pandit.

The Pandit told her that her daughter was destined to become a widow. The girl's mother asked the Pandit for a solution to the problem. He told them that there was a washerwoman who lived on the island of Singhal. If that woman agrees to apply vermilion (Sindoor) on the forehead of the girl, her fate will change. The Pandit also told them that observing fast of Somvati Amavasya will also be instrumental in reversing her fate.

The mother sent her daughter and her youngest son to that island. On their way to the island they came across sea shore and wondered how to cross it. Sitting under a tree they saw a vulture's nest. A male and female vulture lived there with their babies. One day when both vultures had gone out of their nest to fetch some food, a snake entered their nest and attacked the babies. All this was being witnessed by the girl who was sitting there. She immediately jumped to help the vulture babies and saved them from the attack.

When the vultures returned they were really pleased to know what had just happened. As a token of their gratitude they helped the girl to reach the washer woman's house. After reaching her destination she started living with the washer woman.

After a few months the washerwoman was really pleased with the girl and applied vermilion (Sindoor) on her forehead. While returning back to her house she also observed Somvati Amavasya. This reversed her fate and then she lived a happy married life with her husband.

The darkness of Somvati Amavasya transcends into a beautiful morning which gives us hope that all our sorrows will go away. It also signifies that only after absolute darkness comes a light, which means that absolute despair gives birth to extreme happiness and bliss. Therefore, we should not be afraid of the dark and be ready to face all the troubles that come our way 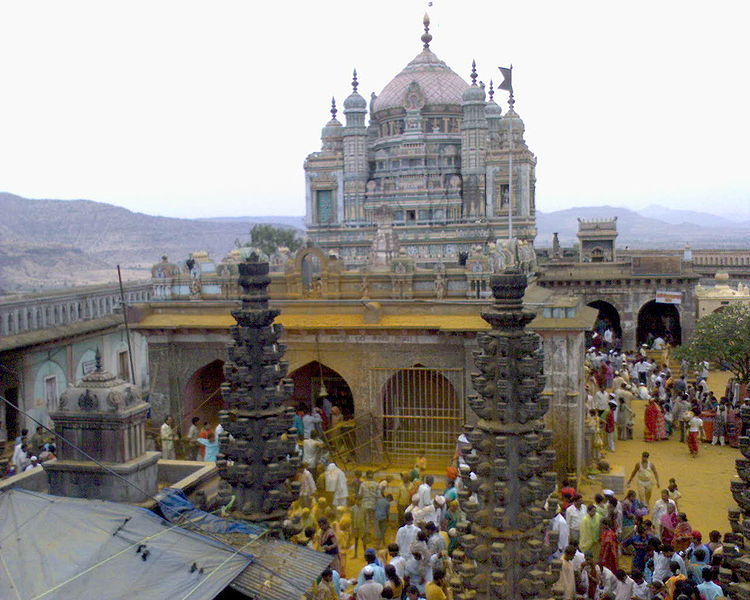 Khandoba's newer Temple in Jejuri. Notice devotees showering turmeric powder (bhandara) on each other and air is filled with turmeric .

Oops, you forgot something.

The words you entered did not match the given text. Please try again.