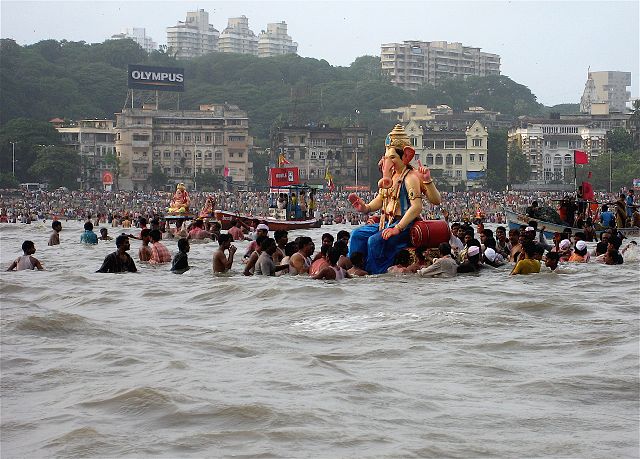 By Chris (Flickr: Ganesh) [CC BY 2.0 (http)/creativecommons.org/licenses/by/2.0)], via Wikimedia Commons

Anant Chaturdashi is the last day of Ganeshotsav when Idols of Lord Ganesha are immersed in water.

Anant Chaturdashi is celebrated with great fervor to pay reverence to Lord Ganesha, the God of wisdom and success. It is celebrated on the 14th day of the bright lunar half of the month of Bhadrapad, according to Hindu calendar. It is mainly celebrated in the states of Gujarat, Maharashtra, Karnataka and Andhra Pradesh.

Once upon a time, there lived a young woman, Shushila who was married to Kaundinya. One day, on her way to take a bath in the river, she noticed a group of women observing the Anant Vow in honor of Lord Vishnu, the preserver of creation, so as to obtain wealth and divinity. She eventually decided to take the Anant Vow which was to be kept for 14 years. As a result of her penance, her family flourished. Kaundinya, the husband of Shushila arrogantly believed their prosperity was the result of his own abilities and hence he destroyed the Anant string which Shushila wore on her wrist. Soon after, they faced extreme poverty and Kaundinya realizing his blunder became repentant for his actions. He decided to live a life austerity till he gained divine mercy. Finally after 14 years of penance, Vishnu took pity on him and restored wealth and happiness to his family.

On this day Lord Vishnu and Ganesha are worshipped at various places. Sweets are prepared at homes and distributed among people. The day is spent in singing, dancing and participating in processions. As it is the last day of the 10 day long Ganesha Chaturthi festival, the idols of Lord Ganesha are immersed in rivers and sweets are eaten by devotees. They pray for the return of Ganesha next year and the festival ends amidst singing of hymns and dancing.

In Maharashtra, there is tradition to offer " Ambe Dal" prasad to Ganapati before visargen.

Oops, you forgot something.

The words you entered did not match the given text. Please try again.